I'm really not a gear-head. I'm not that interested in all the tech-talk about guitars, strings, picks, pedals, amp brands blah, blah, blah. I don't care what string gauges my favorite players use. I know what I like and why I like it. So doing a blog about gear is not my favorite subject matter. I find it boring.

However, I know that some people are really into it - besides, I have a marketing guy telling me I should talk about this kind of stuff now and then. So...

In an earlier blog about my Taylor T5Z Classic Deluxe, I talked a little bit about my Martin MC28.

I have over a dozen guitars; I have an emotional attachment to 3 of them - uhm ok...maybe 4. The MC28 is one of those. I've played the crap out of it, thousands of gigs, recording sessions etc.

In Altered States - Unique Voicings I talked about the motivation that led up to my acquisition of the MC28 in 1981. I said,

The issue of having to replace the MC28 has been weighing on me for several years. It sounds great but it's pretty beat up - over the years the saddle has been replaced with a one-of-a-kind hand-carved bone saddle that resulted in perfect intonation and very low action. The guy who did that was a world-class luthier who has since passed away. The original piezo pickup under the saddle is still in place but the original passive electronics have been replaced with newer active electronics spliced into the original pickup. Installing the newer pickup would have necessitated altering the saddle. I chose to not risk the saddle rather than install the newer pickup. There have been various cracks repaired, and it's full of character; thousands of little finish-checks, places where the finish is worn off by skin oil and sweat, pick scrapes all around the sound hole, scratches, whiskey stains and stories. It fits me like a well-broke-in pair of Dingo boots - which I also wear, BTW. 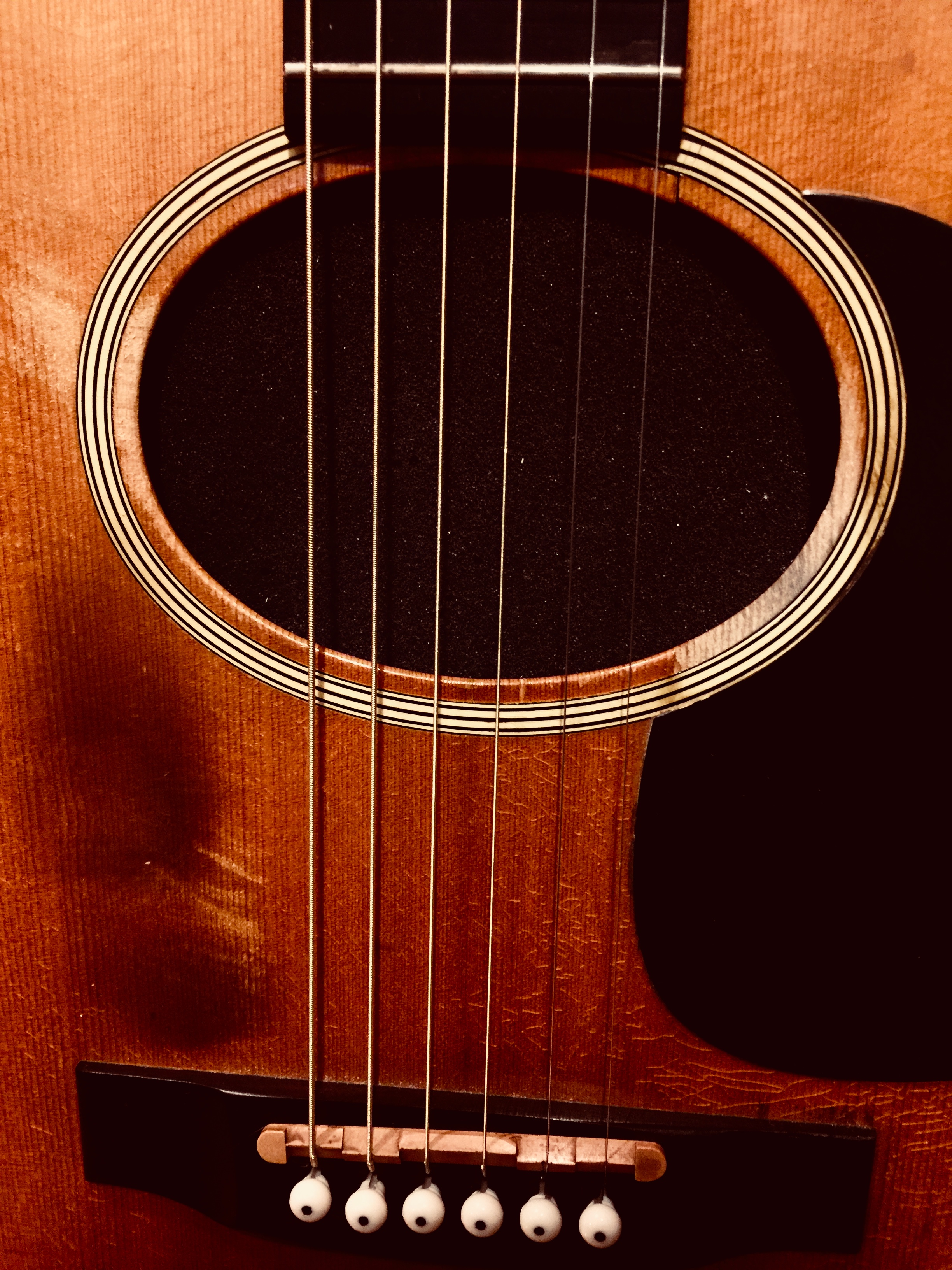 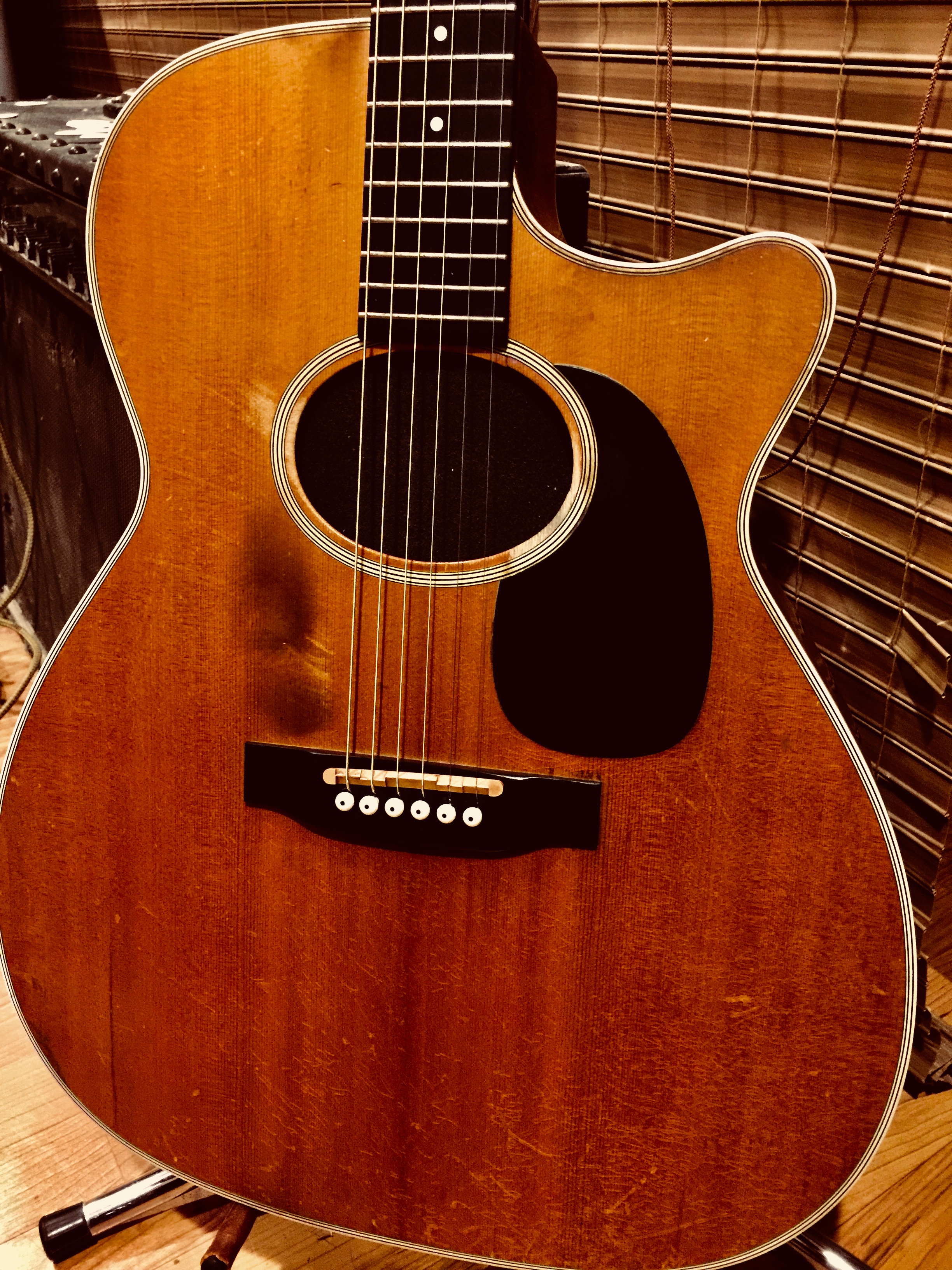 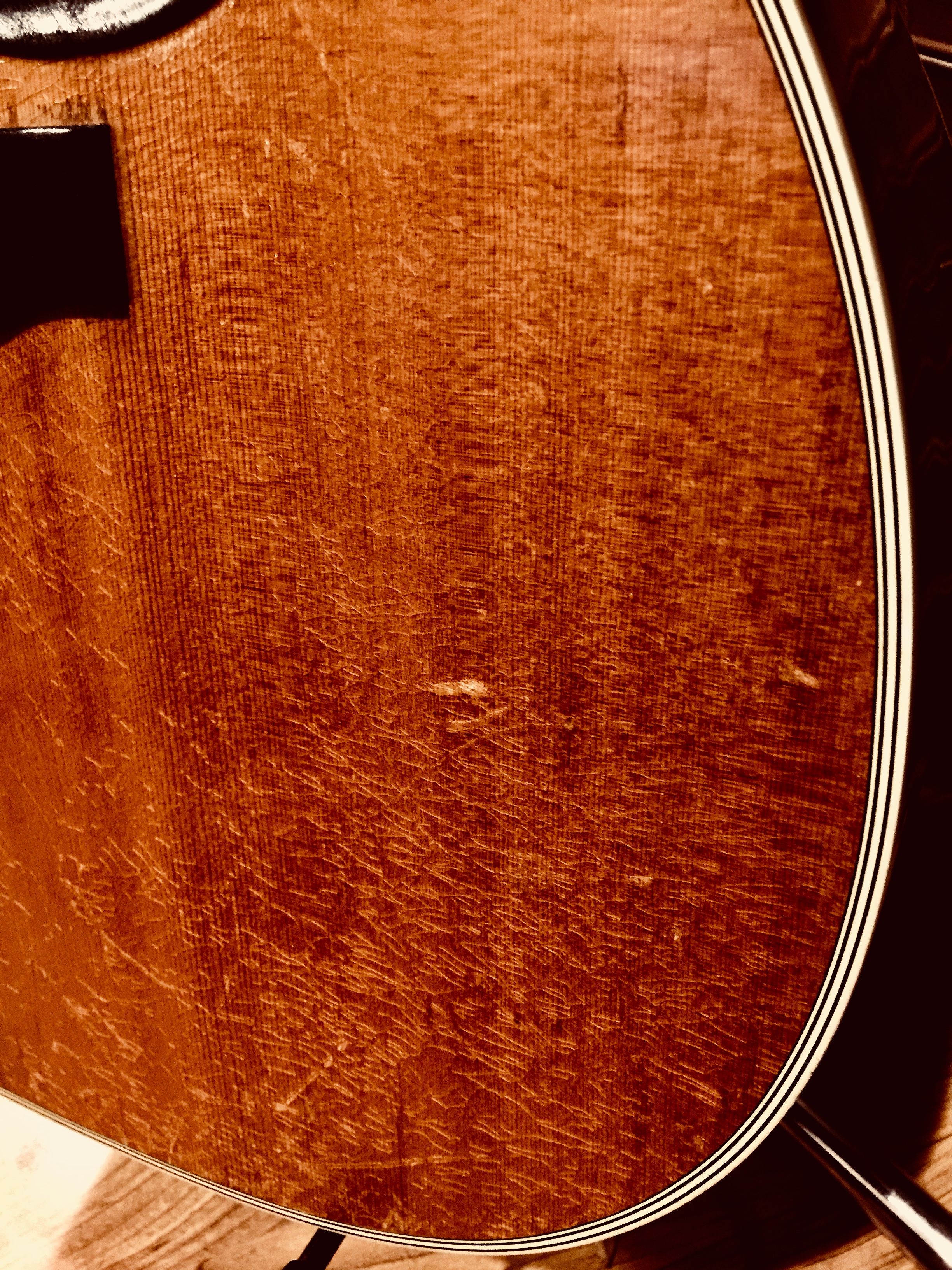 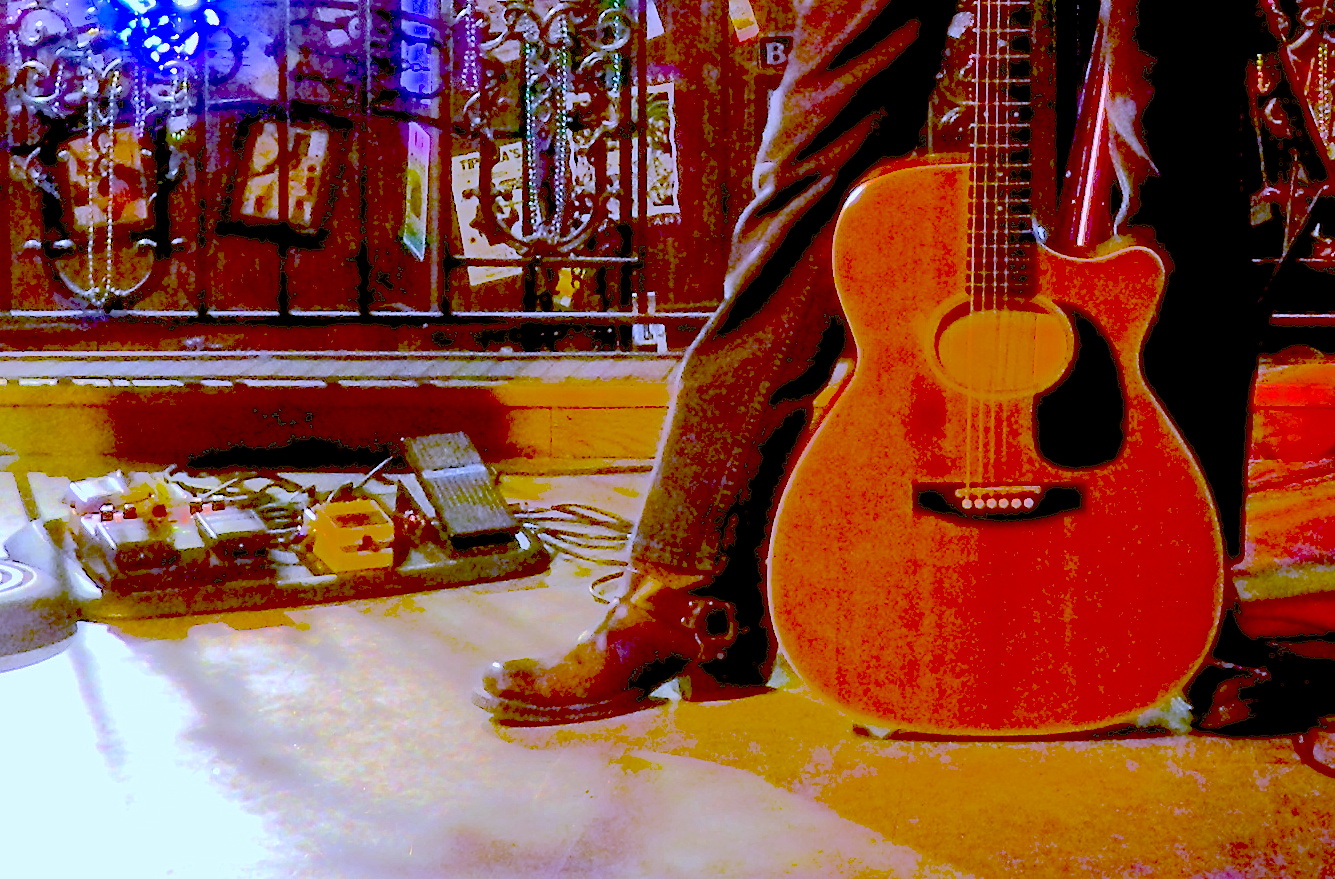 Thinking about the possibility of having to replace that guitar has been unnerving.

I feel better now. Since I wrote that blog I think I may have found a suitable replacement; a Martin GPCPA3.

I bought it used from the music store (Guitar Dock) from which I rent teaching studio space and got a really great deal on it.

I played it for 2 or 3 weeks at home - strictly acoustic. I loved the way it sounded and it felt really good to me. I recorded a teaching video with it - not plugged in; just acoustic - and thought it sounded great.

But the real test is; how will I like it on the gig? I'm not a collector; I'm functionally-oriented. Every one of my guitars has been played live or in the studio and not a single one has cost me more than I've made using it. Several of my guitars have some collectability but I've mostly destroyed the value collectability-wise by the wear and tear of using them for work or by modifying them. If it's not functional I'm not interested.

So the issue was, how will I like the sound of it plugged-in and run through a PA? I was nervous about that, hoping desperately that I would like it.

My old MC28 has no on-board electronics as far as knobs go - no volume or tone knobs on the guitar; I have a pedalboard with a volume pedal and a couple of EQ pedals that I use for that. So in the event I couldn't find a sound I liked on the new guitar I had some outboard control over tone and whatnot on which to fall back.

Honestly? I do not understand the electronics in this thing. My tendency is to just plug it in and start twisting knobs. At the first gig I used it on, that's exactly what I did. Apparently there are presets that model the sound of various microphones. After a few seconds of randomly twisting knobs and pushing buttons I found a sound I liked reasonably well.

Later, after some perfunctory web research I was even more confused; I've read reviews and things that talk about a built-in tuner and menus for EQ and all kinds of stuff that I couldn't find on mine at all. Actually, after a month I did find the tuner. I like that. The Snark clip-on tuner is irritating to me; I'm happy to eliminate it. But the electronics are too complicated. What happened to a simple volume and tone? Am I old now or what?

Nevertheless, I know the preset I like and have not played the MC28 on a gig since I purchased the GPCPA3.

Compare and Contrast GPCPA3 and MC28

I like these aspects of the GPCPA3 over the MC28:

It has a round sound-hole. The MC28 has an oval sound-hole which looks really hip - but an oval sound-hole damper has to be custom-made and I've not pursued that. So in order to make the MC28 functional in a plugged-in, higher volume setting, I've stuffed it with an old ratty afghan and a couple of old t-shirts. I put a piece of black foam in the sound hole to hold the blanket in - and so that it doesn't look like it's stuffed with a blanket. It sounds great plugged in - but it's stuffed with a blanket - that means I don't enjoy playing it acoustically at home unless I take out all the crap - which means you have to radically detune it if not take the strings off altogether; so it stays stuffed with a blanket. The GPCPA3 has a round sound hole - any damper you can buy at a local guitar shop will fit. No big deal to take it out at home so that I can enjoy the beautiful dulcet tones (I've been using it in my home teaching studio and play it almost every day) and then put it back in for the gig. An added bonus is that the GPCPA3 is lighter than the MC28 - because it's not stuffed with a freakin' blanket! It's enough lighter that the weight is definitely a factor in why I haven't used the MC28 since I started using the GPCPA3 on the gig. My back is a chronic mess from hunching over a guitar for 50 years. Pain has a way of sucking the fun right out of a gig!

Even though the scale length is the same it feels like the string tension on the GPCPA3 is less than on the MC28. The MC28 is easy to play - one of the things I was looking for in a steel-string acoustic when I bought it was a feel that was as close to my Gibson ES175 as possible. But the GPCPA3 is even less stressful - I'm having to consciously lighten up when I play it. The net result is it's less fatiguing to play for my left hand. That's cool because it's not unusual for me to play 4 gigs in 3 days on the weekend and for 3 of those gigs to be acoustic.

It stays in tune better - way better. I'm pretty finicky about tuning. With the MC28, I wind up tuning every 3rd or 4th song. With the GPCPA3 I've actually gone a whole set without tuning! That's amazing to me.

The 9-volt battery access is much easier. The active electronics were installed in the MC28 as a modification. The battery holder is mounted inside the guitar at the base of the neck. You have to loosen the strings in order to stick your hand through the sound hole to swap the battery out. There's also the issue of it being stuffed with a freakin' blanket! Actually, that's the reason for the t-shirts. I've arranged it so you have to remove only the t-shirts to change the battery. The GPCPA3 has a typical, easily accessible battery chamber. Swapping out the battery takes a few seconds.

I like these aspects of the MC28 over GPCPA3:

Body width. The MC28 does not have a full-sized body. It's smaller width-wise than a typical acoustic guitar. The wider body-width of the GPCPA3 causes a more awkward right-arm position; more contraction on the pec - I already have chronically contracted pecs from, again, hunching over a guitar for 50 years. The wider body causes more stress on the right shoulder. So far I haven't noticed any shoulder discomfort but I've only been playing it a few months - we'll see where I'm at in 10 years. Because of the guitar-related chronic physical problems I've mentioned (there are others as well) I'm kinda skittish about this issue.

Neck width. The neck on the GPCPA3 is slightly thicker than the MC28. This is not a big deal to me, but it is a little harder to finger a chord where I use my thumb to play a note on the 5th string - like this Db9(#11). My motto is: I like what I'm used to and I can get used to almost anything. I think I can get used to the neck width.

When the battery runs down on the MC28 you get some warning - the tone starts to distort a little bit before the battery fails completely. On the GPCPA3, it sounds fine one second and then just stops and starts making this weird clicking sound. The first time it happened I was solo and thought, "Oh crap, I hope it's the battery, because if it's not, this gig is over!" The looper happened to be going so I just let the looper play and popped the battery out and did the tongue-test. Completely dead. Popped the new battery in and continued the song. So the ease of battery access on the GPCPA3 compensates somewhat for the lack of warning when the battery fails.

On the 2nd battery go-round, one night I realized there was a flashing red light. "Ah!" I thought, "I bet that's the battery warning light." I did the tongue test and the battery was very weak. So there IS a warning when the juice is failing but before the guitar craps out altogether. Yeah, sometimes it takes me a while.

Another aspect that's battery-related is that the battery life on the MC28 is way longer - like months longer. Probably because all the on-board electronics on the GPCPA3 are sucking battery juice like crazy.

Amplified tone. It's really not fair to compare the tone - after all, the MC28 is STUFFED WITH A FREAKIN' BLANKET! The GPCPA3 sounds a little "boxy" to me - probably because it's not stuffed with a blanket! I asked the guys I play with all the time about it and they didn't think it sounded boxy at all. I'm sometimes fighting with the tone on this thing. I'm actually considering trying to find some foam rubber to stuff it with - that would be lighter than a blanket.

The PA is definitely a factor here. I play gigs on various house PAs as well as my own. The GPCPA3 sounds fine on some rigs and on others it sounds "boxy."

As far as I'm concerned, tone trumps everything. Weight is a close second. The jury is still out but I'm leaning towards using the GPCPA3. There are so many things I like about it that I'm tolerating the time and effort it takes to try various strategies to compensate for my issues with the tone/electronics.

I'll write an update when I have more to say.

Sign up as a Master Guitar School site member - it's free! - and get access to dozens of free site-based lessons, a monthly newsletter that contains a brand-new free lesson, and DEEP discounts on lesson series downloads - plus more!